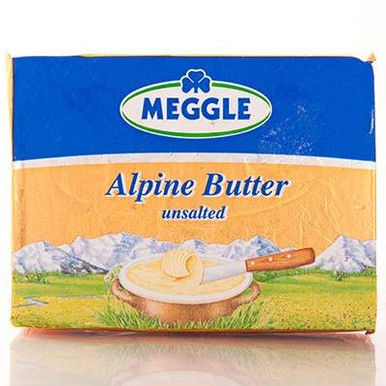 HIGHEST, MULTIPLE AWARD-WINNING QUALITY: MEGGLE ALPINE BUTTER, Made from Grass and Grass-Hay Fed Cow's Milk Hormone Free Milk from Cows not treated with rBST
Butter is one of the purest foodstuffs there are. And when butter is served at the table in as fresh and natural a form as MEGGLE Alpine Butter, then every slice spread is a special pleasure.
For a 250 g block of MEGGLE Alpine Butter, we use a full six litres of milk. A difference you can taste - and which also won a gold medal from the German Agricultural Society (DLG).